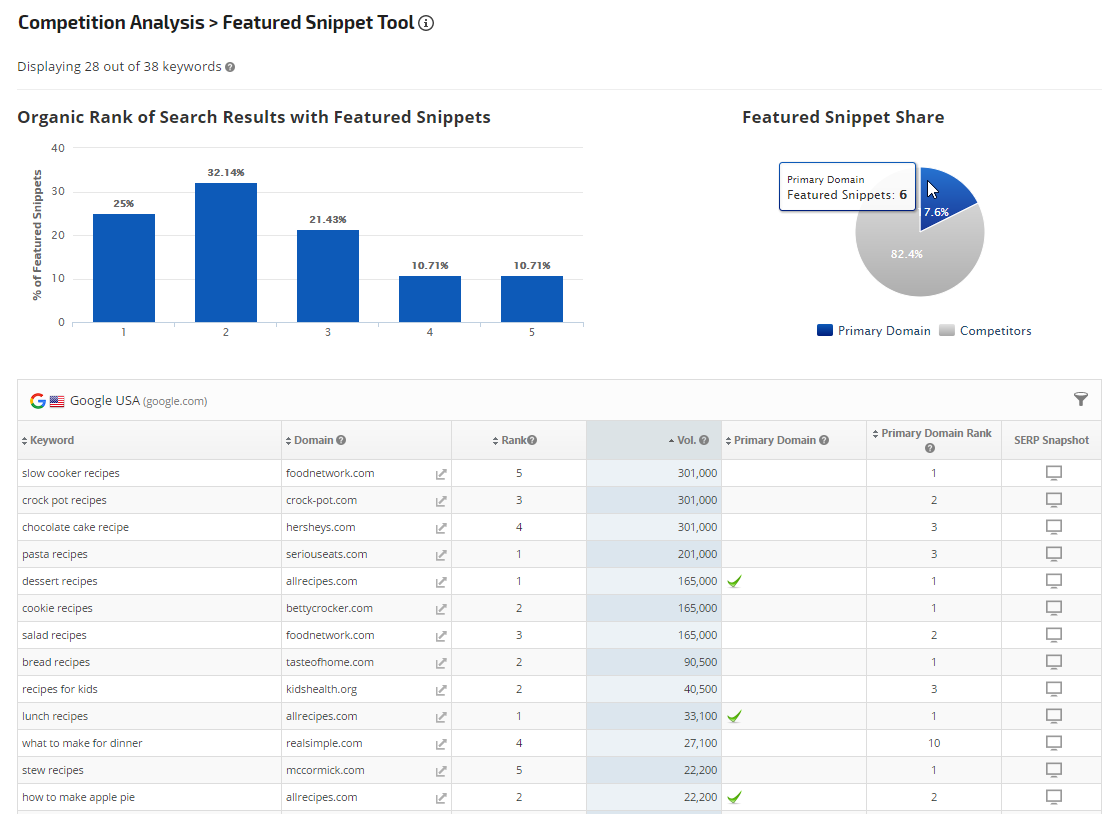 Found in the Rank Ranger user interface under the Research tab and covering both Google Desktop as well as Google Mobile, the Featured Snippet Tool begins by showing the rank distribution of the Featured Snippets that appear for the keywords you are tracking. As a result, you can easily see if Google tends to favor specific ranking positions when displaying a Featured Snippet in reference to your own keywords.


This data becomes significant as Google indeed does favor different rank positions from which to pull Featured Snippets across various niches. In other words, it is not always the case that Google favors the #1, or even the #2 position, for its Featured Snippets. More so, the specific set of keywords you are tracking may in fact buck any of the overall or niche trends in favor of a wholly unique pattern.

Knowing from which positions Google is pulling content for its Featured Snippets is invaluable, particularly if the search engine is favoring the top one or two positions. Having this insight clues you in as to just how competitive scoring a Featured Snippet for a particular keyword or group of keywords is.

With the tool, you can select to see data on just one keyword that you may be highly interested in scoring a Featured Snippet for. In this case you can see exactly which rank positions Google is pulling content from for its Featured Snippets, thereby allowing you to create a keyword-by-keyword Featured Snippet strategy.

Conversely, knowing that Google is spreading its Featured Snippet across multiple ranking positions is also extremely helpful. Having access to this information can help you determine how to best allocate your limited SEO resources. In other words, should Google favor multiple positions with great regularity for a specific keyword or group of keywords, it may be more advantageous to work on improving the rank of those keywords where Google is more position selective.

One of the hardest aspects of tracking your Featured Snippet success is viewing it in context of your competitors' performance. To help you know how your

Presented as a pie chart, the data shows you the percentage of Featured Snippets allocated to the competition's domains across the keywords your are tracking as compared to your own. Hovering over the chart will provide you with the actual number of Featured Snippets that are included within each section of the pie chart.

Lastly, the tool's table gives you the ability to see how a keyword's SERP actually appeared. By engaging the SERP Snapshot feature that is presented within the table's last column, you can view the SERP for the keyword as it actually exists. To that extent, by launching the SERP Snapshot you can see the title, URL, and description for the top 20 search results. Further, you can also see the SERP features that appeared on the page. For Featured Snippets, the SERP Snapshot will show a box that appears above the organic results with the title Featured Snippet that also includes the associated URL. 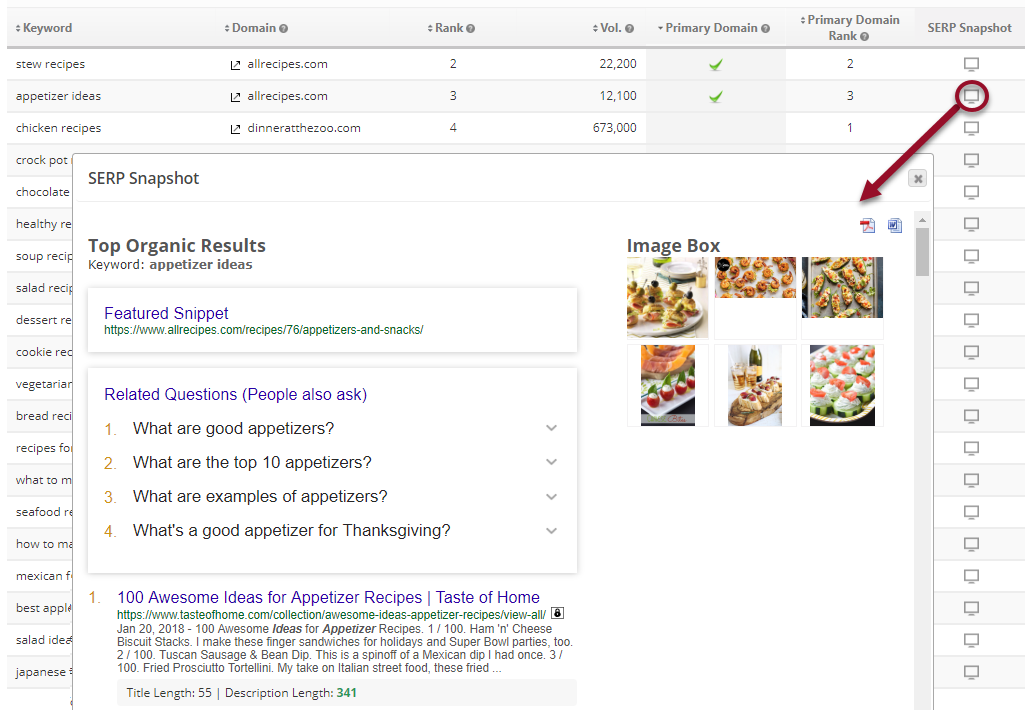 Seeing data for multiple keywords simultaneously, aside for its efficiency, is helpful in refining a Featured Snippet scoring strategy in that it enables you to isolate both areas for improvement and any scoring patterns that may exist. That is, via the tool's table there is the possibility of determining commonality between either those keywords that do or don't show a Featured Snippet with your domain within it. Being able to establish such commonality is significant in that it allows you to more readily isolate what works and what does not work when it comes to scoring Featured Snippets for your specific keywords.

Get the ultimate SEO tools with Rank Ranger